Just a quick note for anyone seeing VSAN performance issues with Dell H310 or LSI 2008 controllers. Its not a secret that the LSI 2008 and H310 Dell with stock firmwares have a very shallow queue depth of 25 (a LSI 2208 in comparison is 600, and a Dell H910 is 975). These are some of the weakest cards to be certified on the HCL and for a small ROBO deployment, or a low VM count with low contention should be fine. Remember part of the benefit of SDS is you can scale down.

For a quick look at firmware queue depths check out Duncan’s article on this.

Now one user tried to push things a little to far, running 5 hosts, with only 3 with storage with 70+ VM’s using Dell H310’s. Performance and experience was fine, until he lost one node and a rebuild kicked off. Running 70 VM’s on 2 hosts combined with the replication overhead was too much and caused an interruption of service (but no data corruption). VMware support tied it back to poor performance of the H310 and heavy load on a degraded 2 Node system trying to rebuild.

In Synchronet’s Lab’s one my earlier VSAN lab builds ran into some odd write latency, that I had initially suspected was the result of a excessively cheap 10Gbps switch. While building out a validation of a solidly performing SMB bundle this week I sought out to get to the root cause. A quick test last Friday (running the vCenter Appliance install wizard) showed at ~250 IOPS a perfectly good Intel S3700 200GB SSD drive spiking over 30ms of write latency and continuing upward. This test was performed against a regular SSD and not a VSAN based datastore isolating the issue. Previous IOMeter workloads showed thousands of read IOPS but write IOPS choking pretty quickly with high latency and low cache rates. Subsequent lab equipment did not have this issue, but had used newer switches muddling the root cause.

We have upgraded our LSI cards to the current firmware, and as of this evening confirmed that the queue depth on the 2008 is increased to 600. Now technically while not supported the H310 is an LSI 2008 controller, and if this is for a lab or a POC or your feeling brave you can follow this guide here. (Note this is not endorsed or supported by VMware/Dell). I’ll see how far I can push writes this afternoon but I expect this should have made our similar issues go away. Alternatively upgrading to something with a queue depth of at least 600 should help fix this (its generally ~$150 per host for a mediocre HBA/RAID Controller that supports decent queue depths).

This is a quick flash (And reminder) of why its a good idea to work with a VSAN partner who validates their builds, understands the technology, and is ready to support you from architecture to implementation (Ok thats my quick advertisement). One thing I am offering right now is anyone interested in a quick architecture call, and a setup of the VSAN assessment tool (TM) I can hopefully help get you the raw information you need to make intelligent decisions on things like Queue Depth, and cache size, and understanding things like the data skew that is important to setting a foundation for a solid VSAN design.

As with any new technology I encourage everyone to do their homework. There’s a lot of FUD going around (and just lack of training and knowledge from a lot of vendors) and issues like this is part of why I’ve been happy to work with VMware’s software defined storage team and the hardware OEM’s for our customer builds. Greater flexibility and response on helpful information (like JBOD mode on LSI 2208’s in a previous post, or adjustments to the HCL, or documentation and firmwares to fix the queue depth issue). For those of you looking for a quick summery. VSAN is a great product and very powerful. Remember a configuration that would be fine for 5 VM’s in a branch isn’t quite going to look the same as for 100 VM’s in a datacenter, or 1000 in a VDI farm. Trying to build the cheapest VSAN configuration that has enough capacity should not be a goal, and cutting corners in the wrong areas can sneak up on you. I do expect some updated guidance from support and the HCL on this. I am hearing 256 but realistically given how cheap the 600 Queue Depth, and how annoying it is to swap out an HBA and re-cable things I’d encourage everyone to start at this point if it makes sense.

VMware – for getting a quick Root Cause Analysis, and from reading the story provided a steady voice of reason on support so nothing further drastic was done and stayed involved until the situation was resolved.
JasonGill – for providing us a good read and not jumping to conclusions that this was a software bug.
Brandon Wardlaw – for braving the controller upgrades and somehow not bricking any of my old lab gear.
LSI – For making an updated firmware for their old controllers and not hiding it.

Note, Expect follow up posts and edits. As I get more benchmarks and numbers about various queue depth’s I’ll post them (or if anyone has any send them to me!). I’m also going to be benchmarking some different switches (Cisco, Juniper, Brocade, Netgear) over the following weeks and hopefully if I have time publish some of our results on things like a 140mpps 1Gbps Brocade vs. terrifyingly cheap Netgear 10Gbps switch.

We did some testing in the lab without VSAN, just doing a basic vCenter Server install to SSDs (Intel 3500) on this datastore. With the 25 queue depth default firmware we saw 30ms of write latency at 352 write iops. Using an LSI based upgrade firmware with 600 queue depth we pushed 1500 iops at a sub 1ms of latency (.17 ms). Its pretty clear that outside of light/ROBO usage the H310 controller is unsuitable for VSAN usage until Dell supports the LSI code upgrade. What is very concerning is that 4 out of the8 of the Dell VSAN nodes are based on this underpowered HBA. This includes one with 15K drives that I’m guessing is meant to be a performance option. This raises a few questions.

1. Does Dell have a firmware upgrade from LSI to push out (We know it exists) to help resolve this.
2. Did Dell run any benchmarks or have any storage architects look at these configs before they submitted them as a VSAN ready build?
3. I’m hearing reports from the field that Dell reps are saying that VSAN isn’t supported for production workloads. Is this underpowered config partly to blame for this? 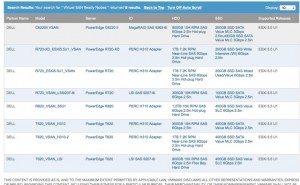