Which Hyper-V admin are you? 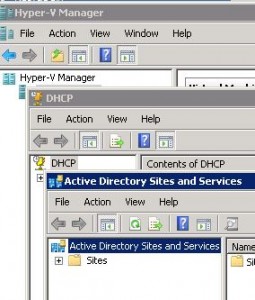 Microsoft has tried really hard to get the message out that Hyper-V is a real platform that can solve real problems. Every Hyper-V deployment I run into tries to solve a few too many problems. I’ve noticed that Hyper-V admin’s are a special breed who generally fall into one of a few camps.

1. The Octopus/Hydra – Someone armed with best practices from the late 90’s is convinced that dedicated network cables on a per VM basis are the only way to deploy Hyper-V. The end result is 6 VM’s and 14network cables coming out of the host. The admin’s in these environments don’t get that just because a server is replacing 6 servers doesn’t mean it needs to take up as much rack space as before.

2. The Kitchen sink – The admin’s in these enviroments don’t let something like best practices slow you down. They try to cram as many roles as possible onto a single box. You can spot these guy’s as they have never heard of core edition.
DHCP – Check
DNS – Check
AD – Why not throw in ALL the FSMO roles?
Hyper-V Sure!

3. Macgyver – Budget, what budget? This admin can be spotted by the questionable supermicro stuffed full of SATA drives and held together by duct tape. He likely choose Hyper-V for its support of fake raid (Dedicated storage controllers or arrays with cache is for fancy rich folk!). He will occasionally be seen with a cluster, but it will be based on SATA RAID 5 in a QNAP, and thinks that its only a matter of time before he can get RSYNC to copy locked VHD’s.

4. The Hoarder – You will know him by his snapshots. He’s convinced somehow that snapshots are a replacement for backups, and has 400GB of Snapshots on an 80GB VM. Even introducing the thought of trying to consolidate him unnerves him. Eventually someone will come along with VMware converter and clean up this mess, but otherwise its best to avoid eye contact with this disaster in the making.