How to make a vSAN storage only node? (and not buy a mainframe!)

I get asked on occasion, “can I buy a vSAN storage only node?” It’s generally followed by a conversation how they were told that storage only nodes are the only way to “control costs in an HCI future”. Generally they were told this by someone who doesn’t support external storage, doesn’t support easy expansion of existing hosts with more drives, and has management tools that are hostile to external storage and in some cases not support entire protocols.

It puzzled me at first as it’s been a long time since someone has tried to spin only being able to buy expansion storage from a single vendor in large chunks as a good thing. You would think it’s 1976 and we are taking about storage for mainframes.

By default vSAN allows you to use all hosts in a cluster for both storage and compute and encourages you to scale both out as you grow.

First off, this is something that can be avoided with a few quick tricks.

Now back to the question at hand. What about if the above approaches don’t work. I just need a little more storage, (maybe another host or 3’s worth) and my storage IO profile is growing with my data so it’s not a hot/cold problem and I’d rather keep it all on vSAN. Also you might have a concern about licensing as you have workloads that if they use a CPU for compute will need to license the host (Oracle, Windows etc).  In this case you have two options for a vSAN storage only node.

First lets define what a storage only node is.

The first thing is to determine what licensing you are using.

Lets assume we are using all flash and purchase a 2RU host with 24 drive bays of 2.5” drives and fill it full of storage (~80TB of SSD can be put into a host today, but as bigger drives are certified in the future this could easily be a lot more!). Now to keep licensing costs down we are going to get a single socket CPU, and get fewer cores (but keep the clock speed high). This should help control power consumption.

Deploy LogInsight. It can track vMotions and power on events and give you a log that shows that a host was never used for licensing/auditing purposes.

At this point we just need a single CPU license for vSphere, and a single vSAN socket license and we are ready to roll. If down the road we decide we want to allow other workloads (maybe something that is not licensed per socket) we can simply tune our DRS rules and allow that host to be used for those virtual machines (maybe carve out a management DRS pool and put vROPS, LI, and the vCSA on those storage hosts?).

Next up, if you are using a licensing tier that does NOT have access to DRS you can still make a storage only node.

Again, we buy our 2RU server with a single CPU and a token amount of ram to keep licensing costs down and stuff it full of 3.84TB drives!

Now since we don’t have DRS we are going to have to find other ways to prevent a VM from being powered onto a host, or vMotioned to a host.

Don’t extend the Virtual Machine port groups to that host!

Deploy a separate vDS for the storage hosts, and do not setup virutal machine port groups. A virtual machine will not power up on a host that it can not find it’s port group on.

What if I’m worried someone might create a port group?

Just take away their permissions to create them, or change them on Virutal Machines!

In this case your looking at a single socket of vSphere and a single socket of vSAN. Looking at the existing price for drives, in this case the “Premium” for software for this storage only node would be less than 10% of the costs of the drives. As someone who used to sell storage arrays I’d put the licensing costs as comparable to what I’d pay for an empty JBOD shelf. There’s a slight premium here for the server, but as your adding additional controller capacity, for workloads that are growing IO with capacity this isn’t really a bad thing as the alternative was overbuying controller capacity up front to handle this expansion.

The other thing to note, is that your investment in vSAN and vSphere licensing is a perpetual one. In 3 years when 16TB drives are low costs nothing stops you from upgrading some disk groups and using your existing licensing. In this way your perpetual license for vSAN is getting cheaper every year.

If you want to control storage and licensing costs, VMware gives you a lot of great options. You can expand vSAN in place, you can add storage only nodes for a low cost for perpetual licenses, and you can serve wildly diverse storage needs with VVOls hand the half a dozen protocols we support. Buying into a platform that can only be expanded by a single vendor runs counter to the promise of a software defined datacenter. This leads us back to the dark ages of mainframes.

*Update to include corruption detection script, and better KB on endurance and size requirements for  boot devices also updated it for vSphere 7 guidance*

I get a lot of questions about embedded installations of VMware vSAN.

Cormac has written some great advice on this already.

This KB explains how to increase the crash dump partition size for customers with over 512GB of RAM.

Given that vSAN does not support running VMFS on the same RAID controller used for pass thru this often causes customers to look at embedded ESXi installs. Today a lot of deployments are done using embedded SD cards because they support a basic RAID 1 mirror system.

While not a vSAN issue directly this issue can impact vSAN customers. We have identified this issue on non-vsan hosts.

GSS has seen challenges with lower quality SD cards exhibiting significantly higher failure rates as bad batches in the supply chain have caused cascading failures in clusters. VMware has researched the issue and found that a amplification of reads is making the substandard parts fail quicker. Note the devices will not outright fail, but can be detected by running a hash of the first 20MB repeatedly and getting different results. This issue is commonly discovered on a reboot. As a result of this in 6.0U3 we have a method of redirecting the VMTools to a RAMDisk as this was found to be the largest source of reads to the embedded install. The process for setting this as follows.

Log into each host using an SSH connection and set the ToolsRamdisk option to “1”:

Thanks to GSS/Engineering for hunting this issue down and getting this work around out. More information can be found on the KB here. As a proactive measure I would recommend all embedded SD card and USB device deployments use this flag, as well as any environment that seeks faster VMTools performance. 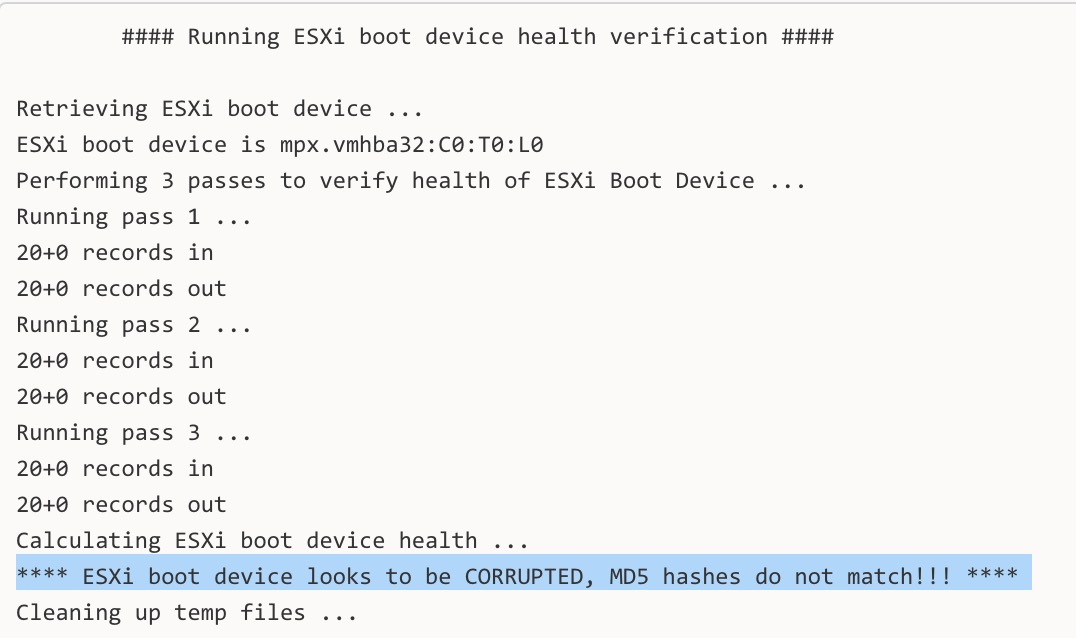 This host will likely not survive a reboot!

Going forward I expect to see more deployments with High endurance SATADOM devices, as well as in future server designs embedded M.2 slots for boot devices becoming more common and SD cards retired as the default option. While these devices may lack redundancy I would expect a higher MTBF for one of these than a pair of low quality/cost SD cards. The lack of end to end nexus checking on embedded devices vs a full drive also contribute to this. Host profiles and configuration backups can mitigate a lot of the challenges of rebuilding one in the event of a failure.

Check out this KB for how to Backup your ESXi configuration (somewhere other than the local device).

Evacuate the host swap in the new device with a fresh install and restore the configuration.

Looking for a new Boot Device?

read the new vSphere 7 boot device guidance. Embedded SD/USB installs should be viewed as a legacy option, and more performance and endurance capible larger devices should be considered.

Looking for guidance on what the endurance and size you need for an embedded boot device (as well as vSAN advice?). Check out KB2145210 that breaks out what different use cases need.