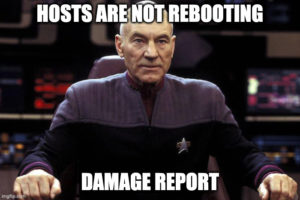 In part one of this series, I highlighted a scenario where we lost quite a few hosts in a lab vSAN cluster caused by 3 failed boot devices and a power event that forced a reboot of the hosts. Before I get back into the step by step of the recovery I wanted to talk a bit about what we didn’t do.

What should you do?

While, I much prefer to work in vCenter, in the event of vCenter having an outage, it is worth noting that vSAN health checks can be run without vCenter.

When reviewing the impact on the vSAN cluster look at the Cluster Health Checks:

2. How many Components are healthy vs. unhealthy

3. Drive status – How many drives and disk groups are offline. note, within the disk group monitoring you can see what virtual machine components were on the impacted disk groups.

4. Service Check. See how many hosts are reporting issues with vSAN related services. In my case this was the hint that one of my hosts had managed to partially boot, but something was wrong. Inversely if you may see a host that is showing disconnected from vCenter, but is still contributing storage. It is worth noting that vSAN can continue to run and process storage IO as long as the vSAN services start, and the vSAN network is functional. It’s partly for this reason that when you enable vSAN, the HA heartbeats move to the vSAN network, as it’s important to keep your HA fencing in line with storage.

5. Time is synchronized across the cluster. For security reasons, hosts will become isolated if clocks drift too far (Similar to active directory replication breaking, Kerberos authentication not working etc. Thankfully there is a handy health check for this.

What Not to do?

Also, while you are at it, don’t reboot random hosts.

This advice isn’t even specifically vSAN advice, but unlike your training with Microsoft desktop operating systems, the solution to problems with ESXi is not always to “tactically reboot” a host by mashing reset from the iDRAC. You might end up rebooting a perfect health host that was in the middle of a resync, or HA operation. Rebooting more health hosts does a few things:

A few other decisions came up as Myles, Teodora and I spoke about what we needed to do to recover the cluster. We also ruled out a few recovery methods and decided on a course of action to get the cluster stable, and then begin the process of proactively preventing this from impacting us with other hosts.

What did we do?

In our case, we called our data center ops team and had them plug in some “random USB drives we have laying around” and began fresh installs to get the hosts online and restore access to all virtual machines. I ordered some high endurance Sandisk USB devices and as a backup some high endurance SD cards (Designed for 4K Dashcam video usage). Once these came in, we reinstalled ESXi to the USB devices allowing our ops teams to recover their USB devices. The fresh high-quality SD cards will be useful for staging ISOs inside the out of band, as well as serving as an emergency boot device in the event a USB device fails.

Next up in the series. A walk through of installing ESXi from bare metal, some changes we made to the hosts and I’ll answer the question of “what’s up withe snake hiding in our R&D datacenter”.

From: Uncategorized
← How to rebuild a VCF/vSAN cluster with multiple corrupt boot devices
Rebuilding the vSAN Lab (Hands-on part 3). →